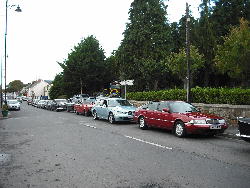 Neale and James arrived at my house around 8.20am and we set off straight away. Neale and James were in the 75 tourer and John and I were in the 820, as the normally reliable P6 had a fuel pump problem. We arrived at our meeting point at Sprucefield before 9.00am. Shortly after we were joined by Peter, Georgina and Claire in their 75 tourer and Colin Bell and family in the P5B along with Bo Simpson in the other P5B. Quite some time later George arrived with Alex and Leslie in the green P5B. We were on our way.

We went straight through Armagh and Monaghan on the direct road to Cavan. We had a short stop for some cash and a toilet stop for the children. We arrived in Cavan at about 11.40am, 40 minutes behind schedule. All the Rover Enthusiasts Club members were there waiting along with Kenneth Robinson who went direct. No-one was too bothered about our late arrival and George headed into the Pub for breakfast. 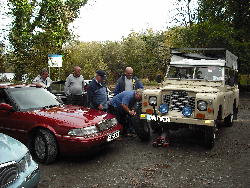 All entrants were greeted with a ‘welcome pack’ containing fruit, a bun, some sweets and a wee pot of jam.

Micheal took us on a scenic drive through Arva, Carrigallen and Killeshandra to Killykeen Park where we stopped for our picnic lunch. The Land Rover had developed a puncture so a joint team of experts from both clubs was assembled to change the wheel. 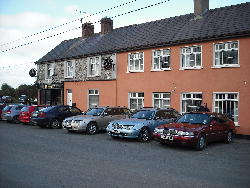 Killykeen Park was a nice place to stop and the children were able to go for a walk over the bridge to see some locals fishing.

After lunch we recommenced the run and travelled through Milltown Village and Cloverhill to finish at Duggan’s Pub, 1½ miles outside Cloverhill. Here we had an excellent 3 course dinner. 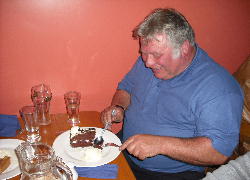 Dessert seemed to be mainly pavlova, but a few of us managed to scrounge some lovely apple crumble and George eventually managed to persuade the waitress to bring him a large piece of chocolate cake.

Joe Whelan thanked everyone for coming and thanked our club members for making the trip down. Each car driver received a commemorative plate with both club logos on it as a finisher’s award. This was a very enjoyable day out with great people. I travelled along many roads I had never been on before. A big thank you to all the lads in the Rover Enthusiasts Club.