Although the meeting time was 5.30pm, I arrived early to display a small selection of my boxed Scalextric cars, which Michael had suggested I brought along.  Colin & John Jeffery and Michael & Maureen Curran arrived at just after 5pm and caught me practicing! It soon became evident that they’d arrived early to do the same and to make last minute modification to their cars!  Shortly afterwards, Jim & Eileen Cole, Ellie Martin and Richard Sloan arrived and the evening got under way. 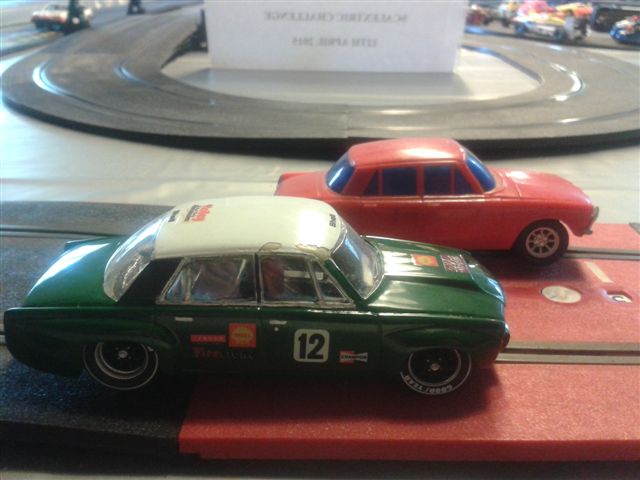 James started the evening by telling us that the only rule was that if you crashed; you had to put your own car back on the track and that each race would comprise of 10 laps before he made the draw for the first round heats. 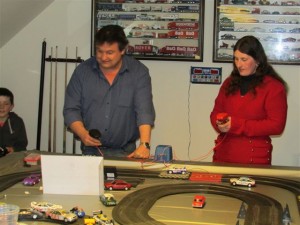 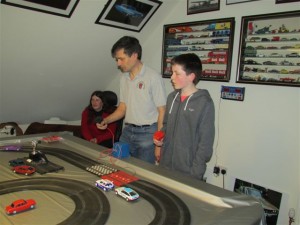 The first round saw Michael racing an SD1 against Ellie racing a Metro, with Michael winning. John racing a Range Rover against me, racing a TVR speed 12, with John beating me convincingly but I guess that’s what I get for being the only person not racing a Rover! Next came Richard racing a Metro against James racing a P6 with James winning, his P6 stuck to the track like glue and was a flying machine! The last heat was between Colin racing the Range Rover and Jim racing the Metro with Jim winning.

Again for the second round the names were drawn to decide who would be racing. This saw Michael and James racing, with James winning followed by John and Jim racing, with Jim winning.

Before the grand final, James treated us all to Dominoes Pizza, chips and soft drinks and thanks to the lovely evening we were able to enjoy this outdoors. As we made our way back into the man cave for the final, we were joined by Colin Robson. 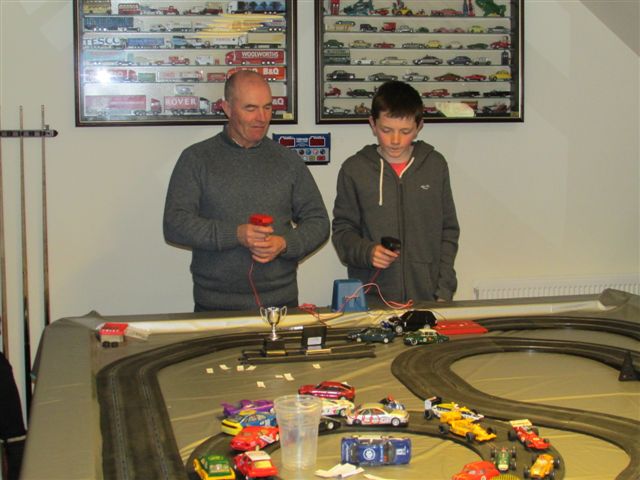 The grand final, over 15 laps was between James and Jim with James being declared the eventual winner. Engraved trophies, provided by James Clarke, were presented to the winner and runner up. 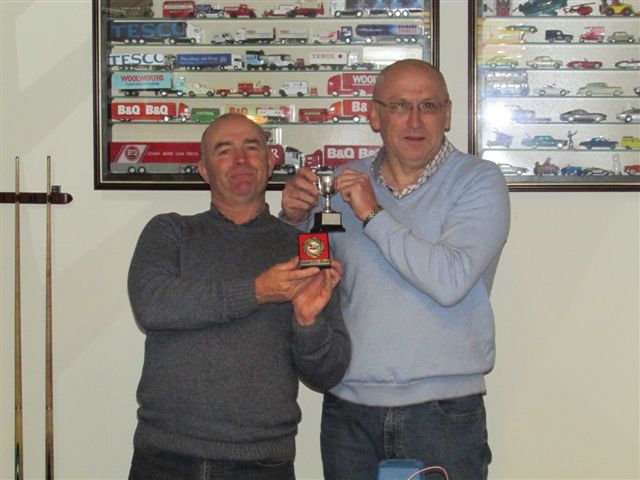 The event was eagerly anticipated and there was a great banter and build up to the night. Some people bought new cars for the night; others modified one that they already had, while all James had to do was lift the winning car out of his display cabinet!

I’m delighted to say that the night was a great success, great fun and very entertaining although it did bring out the highly competitive nature of some of our members. I, for one, am looking forward to the next Scalextric Event.

I would like to thank Michael Curran and James Clarke for organising our first Classic Rover Club (NI) Scalextric Challenge and to James for providing the use of his man cave and for providing food and trophies.