Once again our meeting point was McDonald’s Sprucefield at 8:00am. This year I was on time and was one of the first there. George, my son John and I went in and had our breakfast. Over the next fifteen minutes or so, quite a number of other members arrived and by 8:30 we were all fed and ready to go.

Again I led the Rover convoy out of the car park and out to the M1. As we passed Moira, Michael and Maureen Curran joined our convoy in their red SD1. A short distance further down the motorway I spotted what looked like a 600 in the distance on the hard shoulder. I was just about to get ready to pull in when I noticed it was Gareth Firth and family and he was sitting with the door open taking photos of us! No need to stop then, so on we went to the Argory.

As usual we were shown straight to the Courtyard and parked up in age order. We have got that operation down to a fine art. We were pleased to be joined by Jim McClure and his son in their P4. Jim has been joining our display at the Argory for a number of years now and is always welcome. 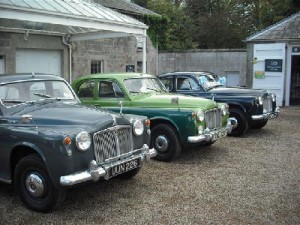 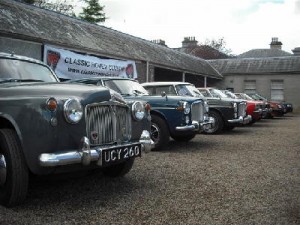 We had a magnificent display of 12 Rovers in the Courtyard consisting of 5 P4s (Patsy McCabe, Michael McKay, Alex Vennard, Richard Sloan and Jim McClure), 2 P5s (James Clarke and George Crothers), 2 P6s (Colin Jeffery and Billy Reilly), 1 SD1 (Michael Curran), 1 600 (Gareth Firth), and 1 25 (Mark Henderson). As we were celebrating the 65th anniversary of the launch of the P4 it was very pleasing to have such an impressive turnout.

Michael, Maureen and Mark erected the ‘History of Rover’ display, which had been modified to give additional information on the development of the Rover P4. It looked great and received a lot of interest during the day.

Maureen had the P4 Supplement and distributed copies to those who receive theirs by post. Some members went off for a read and we received numerous compliments about it during the day. Thanks to Gareth, this one was in colour.

It was good to see the children who were with us having fun throughout the day. Stewart Henderson and John went off for a walk around the grounds and John took some lovely photographs. I must do that walk next year. Later in the morning the Argory staff had organised a chick hunt. John and Stewart decided to have a go and they were each given a map of the grounds and had to mark on it the locations of 20 chicks which had been hidden. When they completed it they each won an Easter egg. They then went back round with Daniel and he got an egg too. 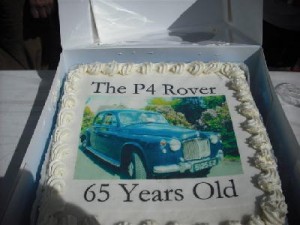 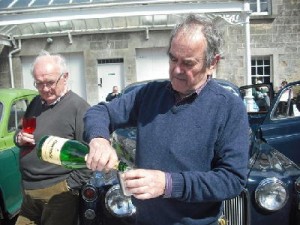 All our members gathered back in the Courtyard at 2:00pm for a special ceremony to celebrate the P4 anniversary. We were joined by some former members and other Rover owners. Patsy had his P4 decorated with bows and banners and he set up a table in front of the car. His organisation was very thorough and he produced a tablecloth, champagne and wine glasses, paper plates and then napkins and even a special spanner wrapped in cling film to stop the napkins blowing away. Then he produced a bottle of champagne, bottles of wine, bottles of water and then a magnificent cake with a picture of his P4. We all gathered round and everyone had a drink and some cake.

At about 3:30 I noticed the Argory staff opening a set of doors and begin to open some boxes. Being nosey, I went over for a look and it was the finisher’s awards. I got mine before the queue started. This year it was an Argory mug. 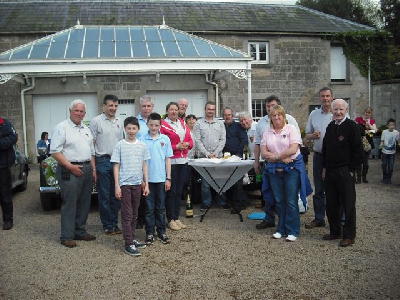 The Argory Show remains one of my favourites each year. This year was even more special and I would like to thank Patsy for the amount of effort he put in to organising the P4 celebration.